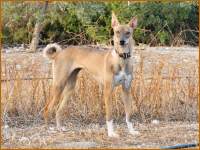 History:
The existence of a primitive hunting dog on the mediterranian Island of Crete has been documented for more than 4000 years. A lot of archaeological findings and ancient documents as well as the investigations of dogbone findings and an extensive genetic analysis by the University of Heraklion and the Natural History Museum of Crete prove that this type of dog has survived almost unchanged up to now. During the time of the turkish rule the dog population on Crete was reduced drastically. The socio-economic development of the island in modern times brought the Cretan Scenthound (Kritikos Ichnilatis) almost to extinction. For the last 20 years some engaged breeders made every endeavour to save this breed. And they are successsful: After the breed has been recognized in March 2003 by the Kennelclub of Greece (K.O.E., FCI) with the official name Kritikos Lagonikos (Cretan Hound) in the group of Primitive Hunting Dogs, they have applied for the international recognition by the FCI. A greek team of the Save-Foundation looks after the Cretan Hound in a conservation project for endangered breeds.

Appearance: A slender but muscular dog with long legs, deep rib cage and slightly retracted abdomen. The type shows characteristics of the sighthounds as well as of the Pariah- or Senjidogs. The height is 52-60 cm for males, 50-58 cm for females, the weight is 15-25 kg. The coat is very short and smooth, a bit longer on the sides of the neck, the buttocks and the tail. Many colours do occur. Special breeding characteristics are the very mobile triangular ears which can be erected but can be set back at the sides, too and the curled tail which is stretched out in rest or in fast running. The dog is extremely nimble, its movements elegant and flexible with a springy trot, has an ability for a fast sprint and it owns exceptional jumping abilities.

Characteristics: The Cretan Hound is lively and agile with the need for physical exercise, but at home it is quiet and very clean. With strangers it is reserved or shy, otherwise gentle and friendly and easy to get along with other dogs. It is intelligent, sensitive, playful and gregarious. It is considered to be trained easily, if you offer it enough action and physical exercise and are considerate of his love of freedom and his hunting instincts. It can't stand gruff and harsh treatment and is bored by monotonous training.

Usability: In the rugged mountains of Crete the Cretan Hound is mainly used for hare hunting. Optimally adapted to the harsh terrain and the hot climate, it is the favourite dogbreed of the Cretan hunters. The dogs hunt alone or in small groups, track down the prey, chase, kill and retrieve it. Meanwhile they make eye contact with the hunter at regular intervals and are guided by optical and acoustical signals. They are fast, tireless and have a remarkable ability for climbing and jumping. In the past and at present these dogs are also used for guarding cattle and home. They are well suited for dogsports like agility, tracking and coursing.
The Cretan Hound is easily cared for and long-living, hereditary diseases are unknown.
Rare even in his habitat, there is no breed outside of Greece, only 12 dogs of this breed in Germany, one female dog in the Netherlands, one male dog in Canada and in New Orleans, and one male and one female dog with their puppies in Finland.

<<< zurück (back) Kurzportrait
>>> weiter (next) Geschichte

Wo gibt's was Neues: