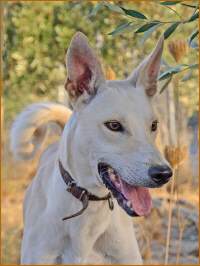 The breed standard for the Cretan Hound has been written in 2003 in Greek and English by Maria Ginala, recognized judge for the breed and was basically for the recognation of the breed in Greece by the K.O.E. (Kennel Club of Greece).

Greece. More specifically, the grand isle of Crete, where the breed exists unchanged for at least five millennia. Findings depicting the Cretan hound dog and specific mention of the “Kressai kynes” (Cretan Hounds) date already from the prehistoric period of the Aegean civilization, the Cycladic, Minoan and Mycenaean art and Homer’s epic poems.

Artifacts portraying the Cretan chasing hound already appear in the prehistoric settlements of the Isle of Crete that pre-date the Minoan civilization (3200-1700 BC). A metal-made piece showing the ship of the “Great Goddess” bears the characteristic silhouette of the Cretan Hound on its bow (Herakleion Museum). Stampstones, ceramics and metal utensils, ornamental objects, sculpture and murals of successive historical periods offer us the form of the Cretan Hound without change since and through the centuries. Of particular importance is the Minoan-style mural of Thera, presenting to us the authentic breed type. The distinguished archaeologist Professor S. Marinatos had dedicated extensive labors to this living monument of Greece, certifying its continuous historical existence on the island with the same conformation and working characteristics to the present day.

Primitive chasing hound, lithe, sinewy, athletic, fast. Prick-eared, smooth-haired, long-legged, with an elongated, wedge-shaped head and circular tail. Muscular development powerful, wih long and fine muscles. Nimble, agile, robust, swift, with quick reflexes and fast gallop, the Cretan Hound hunts the hare (and the wild rabbit) alone or in pairs using sight and also scent. Enduring and effective on all terrains, especially the rocky and harsh ones where his climbing abilities come to the fore, he seeks, finds, forces out from hideout and chases the prey with great vehemence, hunting prowess and remarkable agility, able even of capturing it. He gives “voice” (which is idiomatic: thin, bemoaning and rather low in volume) at the sighting of the prey and during the chase. A low-maintenance animal with moderate needs, strong built and vigorous nature, he is able to work for long hours even on the most demanding mountains and ravines of his birthplace where, in the past, he also hunted the local wild mountain goat successfully.

Alert, intelligent, gentle, on the hunt full of dash, dare and stamina, persistent, brave and tireless (diaponos = laborious), at home meek, obedient, well-mannered, affectionate, graceful. Towards strangers somewhat reserved, with his family tender, expressive and devoted, calmly co-existing with other house pets and farm animals, (parippos = horse-by; used to run alongside the riders in antiquity) and in general the hound’s behaviour is balanced and reliable. Slow maturing and highly instinctive. His senses are remarkably acute and he has a great degree of perceiving ability, liveliness and a sharp mind. Arrentive, curios and inquisitive, he is easily trained to visual commands and distance control. In the ancient times he was considerd best for hunting deer, wild boar and even the bear. His use for feathered game is to be avoided completely as it makes the hound lazy and losing interest, this task being below his abilities. He is born for the chase and only through this he reaches the full physical and mental potential.

Elongated, wedge-shaped, well-chiseled (especially under the eyes), with skull and muzzle preferably equal in length. Cranio-facial axles parallel or very slightly diverging. The top of the skull is very slightly rounded and broad, like the cheeks that converge evenly towards the front. The sides of the skull are slightly rounded off. Cranio-facial angle (stop) smooth, progressive and shallow, eyebrows (frontal lobes) moderately developed, median furrow visible between the eyes and progressively less towards the top skull, occipital protuberance only very slightly noticable.

Wedge-shaped, with top line of nose straight; evenly tapering towards the nostrils; the nose itself is quite large, moist, elastic and with wide- open nostrils. The nose overhangs the lip line and is dark-coloured (black or, in brown dogs, deep chestnut).

Jaws strong, full and complete dention forming a scissors-like bite (pincher/level bite tolerated). Teeth well-developed and sound. The opening of the mouth and the lips is deep. Lips fine, tight, black (in brown dogs can be brown) without flaccidity.

Medium-sized, triangular, erect, broad at base, set high and carried slightly conical to the front. Pointed to the end and only very slightly rounded off at the tips. The leathers are fine-skinned, the muskels very well-developed and the cartilage strong. The ears are very mobile, vigorous and tense. Depending on the occasion, the dog moves the ears turning them to the sides or backwards, or folding them down on the sides of the neck. Cropping of the ears is prohibited.

Dry, muscular, with a slight arch at the nape.

Shoulder blades long, laid-back and muscular without being loaded. The withers protrude slightly. Upper arms slightly shorter in length than the blades. The angle formed at the point of the shoulder is moderate. Legs straight, sinewy, long, with light but powerful oval bone. Pastern joints strong but not dilated, pasterns resilient, elongated and slightly oblique. Feet large, oval, with long and strong toes, powerful curved nails and hard, resilient pads.

Trunk muscular, long, dry, powerful but not heavy. Its depth not qute reach the elbows. Chest of moderate width, deep enough; fore chest and sternum not particularly developed in front but more towards the back and its lower parts. Ribcage very well-extended to the rear; ribs arched and, in the area of the elbows, flattened inwards. The deepest part of the ribcage and sternum is behind the withers. Back strong, sinewy, muscular, elongated, straight, forming a slight curve over the loins. Loin area short, powerful, muscular and dry. Pelvis long, oblique, muscular. The upper edges of the hip-bones are slightly noticeable. The underline of the body is gracefully retracted high towards the abdomen and belly, which is dry and muscular.

Angulations matching the front and not excessive. Thighs muscular and developed in width but not so in thickness, long, flattened and powerful, the thigh-bones forming with the pelvis an efficient lever system of muscla attachment and motivation. The angle formed in the knee-stifle joint is, ideally, equal to the angle formed between shoulder and upper arm in the front and in any case never exaggerated. Stifle log, muscular, sinewy, dry on its lower parts and powerful. Hock joints well-knit, strong and parallel to each other. Rear pasterns dry, quite long and perfectly parallel to each other, without dewclaws. Feet as in the front.

Set quite low, doesn’t reach the hocks. Broad st base, tapering evenly towards the tip. Carried upwards in curve, semi-circular or forming a ring on the back, but without a hook (ankylosis) in the end. In repose the tail relaxes downwards without any sign of fracture or side-twist. The hair is longer underneath. The Cretan Hound used his tail as a tool os stability and also of expression. Tail-less, short-tailed or docked dogs are untypical and therefore disqualified.

Light-footed, easy, fast and graceful strides with even steps, without crossing the legs or feet. From a springy trot at low speed the dog tends to soon change his gait to a gallop.

Skin fine, rather taut, durable, without wrinkles or looseness, with well-pigmented visible mucous membranes. Coat smooth, hard, perfectly straight, dense, very short and fine on the head, the ears and underneath the body, a bit longer on the sides of the neck, the buttocks (breeches) and the tail.

Any clear deviation from the above desirable characteristics is a fault, which results in lower qualifications according to the degree of the deviation from the ideal and the seriousness of the fault. More serious faults are those affecting the efficiency, the behaviour and the expression of the correct breed type.

Male dogs must have two visible normal testicles fully descended to the scrotum.

The Kennel Club of Greece 2003

<<< Zurück (back) Standard
>>> weiter (next) Kurzportrait

Wo gibt's was Neues: